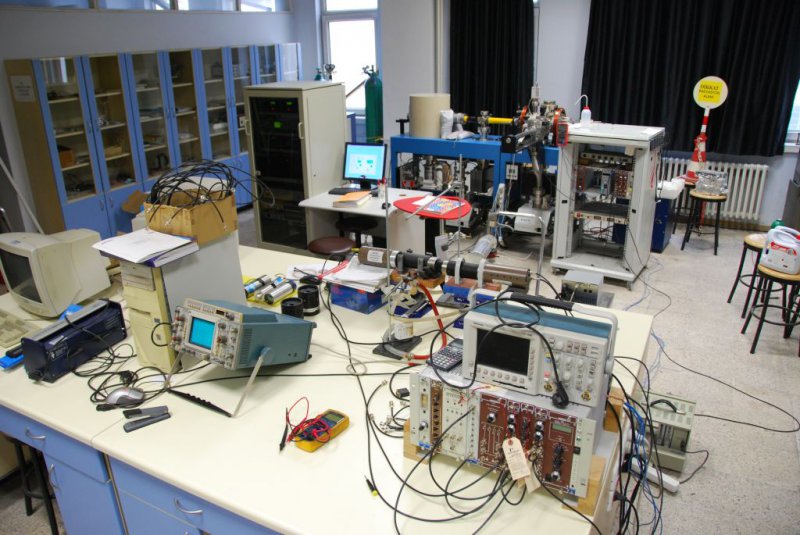 For the different generation of PAMAM dendrimer macromolecule, the temperature-dependent change of structural free volumes will be investigated by Positron Annihilation Lifetime Spectroscopy (PALS) technique. In the PALS technique, the observed spectrum will be divided into three components, the longest lasting of these components is the ortho-positronium (o-Ps) formed by the free pick-off of the molecular structure cavities. By examining the relationship of ortho-positronium (o-Ps) with temperature, especially the change in glass transition temperature, it will be examined the difference in o-Ps annihilation parameters, heating and cooling processes. As a result, in the literature, it will be tried to establish a correlation between possible studies related to PAMAM and free volume.

Ultrasonically agitated TiO2 micro powder has been introduced in a PMMA matrix using the mechanical stirrer with low mixing rate to produce the PMMA/TiO2 composite films in the free standing form. The filler contents of composites were selected between (0-7) % (w/w), since TiO2 particles cannot be suspended in chloroform at a higher rate than 7% of the filler content by ultrasonic agitation. Optical and dielectric properties of composites were determined by UV-Visible and dielectric spectrometry. In the UV region, 450% improvement of UV absorption was achieved in the TiO2/PMMA composite compared with neat PMMA. Structural properties and hole free volume of the composites were determined by X-ray diffractometer and Positron Annihilation Lifetime Spectroscopy (PALS), respectively. The particle size and homogeneous dispersion of the particles in the polymer matrix related to the hole free volume of the PMMA.

Thermoplastic Polyurethane (TPU), dissolved in dimethylformamide at 80 ºC, were doped with different amounts of Boron Nitride (BN). TPU/BN composites, prepared by using a solvent casting technique, were obtained in the form of films. Optic characterization of TPU/BN composites was done by FT-IR in the 400-4000 cm-1 range; thermal by TGA under N2 atmosphere and 30 to 750°C range with 10°C.min-1 heating rate, DTGA and DSC technique - heating from 0 to 200°C, all at a heating rate of 5°C min-1, and cooled with the same rate. Finally, structural characterization done by SEM, and defects on the molecular level were studied using PALS.

Sample synthesis was observed to be successful by FT-IR. Thermal stability of the TPU/BN composite was observed to increase with increase in the amount of BN doped. SEM results showed that BN particles were dispersed homogeneously throughout the polymer matrix for lower amounts doped, but doping levels higher than 7% results in agglomerations, causing a decrease in the thermal stability of the material. PALS studies revealed that o-Ps lifetime (free volume) increases in all composites with increasing temperature. Free volume intensity (hole fraction) increased till 1% doping weight for all the samples, after which it decreased relatively gently.

Polymer based ionic conducting materials have important interest because of their potential applications in polymer electrolytes and membranes used as fuel cell.  Ionic conductivity mechanism is explained with the free volume model.  Free volume notion in polymers is significant in order to explain viscosity, ionic conductivity, glass transition temperature and physical quantities such as mechanical and thermodynamic properties.  In the study of Cohen and Turnbull and later Bamford et. al. the transport phenomena in polymers have stated in terms of free volume arising from the structural disorders in amorphous polymers.  To interpret ionic conductivity mechanism, Yahsi et. al. have purposed a model in terms of temperature and pressure depended hole fraction as a measure of free volume.  On the other hand, the size and the amount of free volume can also be measured by ortho-positronium (o-Ps) lifetime using the Positron Annihilation Lifetime Spectroscopy (PALS), a unique tool to probe the holes.

For this purpose, PVdF-co-HFP (Poliviniliden Florür-co-Hekzaflorur) was used as polymer matrix in this work because of high ionic conducting features and superior mechanic properties.  Polymer electrolytes containing different types lithium salt (LiClO4, LiPF6, Li triflat) and various amounts of salt (1, 3, 5, 10, 15, 20% (weight) were prepared by solution casting method.  The changes of the nanoscopic free volume and hole fraction were investigated with respect to temperatures using the PALS technique.   Eventually, the hole fraction has an inflection point about 0.03 molar ratio.   The free volume increases when it is less than 0.03.  It is the fact that the formation of polymer and salt complications which occur between the fluorine groups in the polymer backbone and Li+ ion in salt retards the ordering of polymer crystalline and causes the formation of amorphous phases.

The dependence of free volume on the nanometric structure of polyurethane sample has been investigated for the broad range of temperature 18-373 K using positron annihilation lifetime spectrometer (PALS). Free volume and hole fraction deviations have been studied in five separate regions. Particularly the transitions of the glass state of polyurethane’s soft polyester-polyol and hard haxametylenediisocynate structures have been observed at Tg = 214.1 K and T'g = 339.4 K temperatures, respectively. The phase transition of hard part is in a good agreement with DSC measurement given in the literature. Yet the existence of the trapped oxygen and water molecules on synthesizing the sample has been observed and the effect of their phase transitions on the polyurethane structure has also been studied.

A plateau has occurred under Tg at the glassy-state transition.  It’s also been observed that the existence of oxygen in the plateau regime has caused the structural collapse due to the melting-state transition of oxygen and remained the plateau regime invariable while constructing new free volume.  For T > Tg, soft part of polyurethane has come off the glassy-state, therefore, the size and number of the free volume have increased.  It’s been expected that the glassy portion of hard part of polyurethane has reached a plateau regime before . However, a structural collapse of hard part of polyurethane has occurred and restructuring free volume has arisen. The transition glassy-state to plastic-state has happened for T > T'g .  Thermal energy at this state has caused the excitation and flexibility in structure of hydrogen bonds of the hard part and as a result there is a slow growth in free volume size and no difference in the hole numbers.

Polyvinylidene fluoride-co-hexafluoropropylene (PVdF-co-HFP) with conducting polyaniline (PAni) was studied to measure free-volume intensity (), ortho-positronium (o-Ps) lifetime (), and Doppler momentum distribution parameters (S and W) as a function of temperature varying from 273 to 373 K and PAni weigh percentage varying from 1%-20% using the techniques of Positron Annihilation Lifetime Spectroscopy (PALS) and Doppler Broadening Annihilation Radiation (DBAR). It has been observed that the free-volume intensity and the o-Ps lifetime increased sharply with PAni weight percentage up to 4% after which decreased slowly. DBAR momentum distribution parameters behaved similarly as well and it’s assumed that in the studied samples one-type defect was to exist. The thermal expansion coefficient also as a function of PAni weight was extracted from PALS data.